In one month Christina and I will be in the land of the rising sun – Japan. We will be visiting Tokyo, Kyoto, Mt. Fuji, Hiroshima, Osaka, and Yakahana; all of this in 15 memorable and most likely exhausting days. Several city tours are scheduled, along with days for relaxation and days for cultural experiences. One of the most quintessential components of Japanese culture is the Geisha. When we are in Kyoto – the cultural center of Japan – Christina is going to get to experience what it is like to dress up like a geisha. She will get to pick out a kimono and wear the traditional white makeup and black wig. I almost even signed up for the “samurai” experience, but thought $150 was overkill to hold a sword and wear a robe.

It’s funny to see pictures of white tourists dressed as geishas – it’s like a culturally insensitive Halloween party. Even though it looks odd for a white woman to be a geisha, there was actually an American woman who entered this veiled world back in the 1970’s. Liza Dalby was the only foreigner ever to become a geisha, and she details her experience in the Nonfiction/Memoir-Geisha. Dalby became a geisha as an anthropologist researcher; she wanted to accurately understand and dispel the myths associated with this secretive world. If you ever go to Japan, read this book because the world of a geisha is a microcosm of Japanese culture. 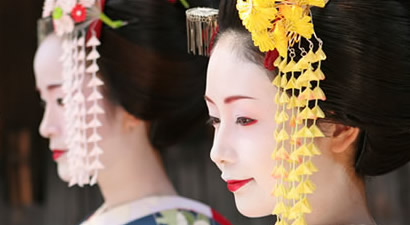 The first geishas appeared in the 18th century and were actually male entertainers. Eventually, men were replaced by women and by the beginning of the 19th century, the job of a geisha was seen as a female occupation. Geishas were revered in society as fashion forward and socially influential, like we see celebrities today. The role of a geisha was to entertain male patrons through witty conversation, dancing, singing, and instrument playing. The white makeup that a geisha wears initially accentuated their expressions and performances in dimly lit rooms before the advent of electricity. As time went on, the geishas maintained their makeup and kimonos because their traditional look was a sacred treasure to a nostalgic Japan. Before WWII, it was common for rural families to sell their daughters to geisha houses. These young girls would apprentice for several years before mastering all the artistic skills of the profession.

With modernization, this practice stopped and the geisha of today join the business in their 20’s – the artistic requirements are not as strenuous due to changing tastes of clientele. The geisha’s job is to provide men (sometimes women) with a relaxing atmosphere where they can laugh, discuss, and enjoy picturesque entertainments. Japanese culture is very different from western culture in respects to the role of the wife. Wives in Japan are seen as modest mothers who are masters of the house – interactions with husbands are usually more serious and formal. The role of the geisha is to provide the other side of femininity – gracefulness, joking, and innocent flirtation. Geisha are not prostitutes and rarely have sex with their patrons. Of course, geishas can have sex with their clients, but it would be like visiting a bar expecting to have sex with a bartender.

Geishas usually live together in a tea house which is led by a “mother.” The mother is a retired geisha who trains, mentors, and organizes the various patron requests. The profession of a geisha can be lucrative and long lived for women in Japan – geishas can work for decades if they choose. Many Americans see the career of a geisha as demeaning towards women. In reality being a geisha in Japan allows women the rare opportunity to run their affairs and escape the restrictions associated with raising a family – when they interact with men they are respected to a much higher degree compared to other service jobs. Geishas are revered as talented artists, stewards of culture, and educated conversationalists.

There is no equivalent occupation in America. An American style geisha would probably be a well-educated woman who lived in a sorority house and entertained (maybe with a fiddle) while wearing high quality “wild west” garb. Making comparisons is impossible, but it allows one to understand the true idiosyncrasies of the profession. While in Japan I want to see a geisha, and hopefully, we will witness some walking in the streets of Kyoto; it costs $450 per person as a tourist to be entertained by a geisha. I’ll just try to sneak a dance with Christina after her transformation 🙂