At some point in the 9th century, a Viking was accused of being a “child-lover” because he didn’t want to impale babies with his spear. Vikings are known as gruesome-raiders which struck fear into the heart of villagers throughout medieval Europe. They were pagans who worshiped Odin and Thor – believing that an eternal feast awaited them in Valhalla. Today, Viking culture inundates our everyday life. Early morning TV has commercials for Viking River Cruises. “Bluetooth,” which connects electronics, is named after a V

iking king. Four days out of each week are named after Norse Gods: Tuesday (Tyr), Wednesday (Wodan which was Anglo-Saxon for Odin), Thursday (Thor), and Friday (Frigg). Dublin, York, and Kiev were a few major cities founded by Vikings for trade. The Normandy region of France was named after Viking inhabitants. The modern states of Russia, Belarus, and Ukraine were first centralized by Vikings. Iceland, Greenland, and North America were first discovered by Vikings. The nautical terms of starboard, port, and keel were created by the Vikings. Most importantly, the Mad Max series was inspired by the Vikings. I was able to learn more about Vikings in this month’s edition of National Geographic and the book – The Sea Wolves: A History of the Vikings by Lars Brownworth. 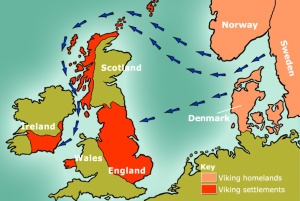 se was in Scandinavia between 800 and 1100 AD. There were the Norse (modern day Norway) to the west, the Swedes (modern day Sweden to the east), and the Danes (modern day Denmark) to the south. The actual word “viking” is believed to derive from the Vic region near the Oslo Fjord where iron was plentiful for sword production – eventually all raiders were referred to as “Vic-ings.” There were two types of Vikings: homesteaders and raiders. The Vikings had permanent communities which tried to live off the land and coast. There were also men who sought out fame and fortune on the sea – these were the “sea wolves” that changed the world. These Sea Wolves mastered the construction of the longboat and were able to sail quickly to any location. These men were motivated by treasure, women, and power. The more a raiding party could collect, the more respected they were on their return to Scandinavia. The first raids occurred at monasteries in Ireland, England, and France. Monasteries at the time stored many valuable relics, manuscripts, and currency.

A raid would usually consist of a few longboats (picture to right) quickly docking with 10-50 Vikings, subsequent killing of inhabitants, collection of plunder, and a quick getaway. Vikings were fierce warriors and their strengths were stealth, quickness, and cunning. Eventually, the raids started to dry up and the Vikings were forced to travel further from their homes; they would eventually reach as far as Italy.

Some of the greatest Vikings wanted more than just plunder, they wanted land. Forces
would eventually conquer Irish, French, English, and Eastern European armies to control huge swathes of territory. They controlled key ports and became handsomely wealthy through trade, extortion, and sheer intimidation. To find more land, many Vikings traveled west and eventually founded Iceland and Greenland – getting as far as North America; they were never able to permanently settle the Western Hemisphere because of limited colonists. To the

east they settled into modern day Ukraine and traded with the Byzantine Empire. Vikings in the east were called “Rus,” (picture to left) which is the origin of the word “Rus-sian.” Eventually, the Vikings in these land-grab areas would lose much of their raiding culture and eventually became established monarchies. Many Viking kings decided to adopt Christianity to unite their strongholds which many times consisted of several types of ethnic groups and cultures; Scandinavia also shifted to a monarch structure to have better relations with European kings. In the end, the Viking culture fizzled out with the creation of Christian domains which promoted domestic virtues over sea-faring vices. Overall, the Vikings altered the political and social landscape wherever they went and are in large part responsible for the unification of Scotland, France, Britain, The Holy Roman Empire, and the kingdom of Sicily. They were pagans, who more than any other medieval power, spread Christianity throughout the world. Their enduring reputation truly held up to the Viking belief that all men are mortal – only the noble name can live forever.

5 thoughts on “Vikings Changed the World”